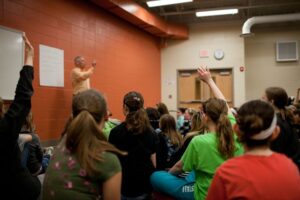 It is good to be efficient, yes. It is also good to be comprehensive.

Sometimes, however, those two things don’t work well together.

Since starting this business, most of my work helping groups has been through 4-8 hour workshops.

There is a demand for leadership training that can be delivered in much shorter periods of time, though.

This has forced me to work with previous clients to find out which “nuggets” have made the biggest difference for them in terms of their leadership success.

These “nuggets” may not be the most important aspects of leadership, but they made the most difference in the shortest amount of time.

There are three – I have started referring to them as “The Big Three.”

Number One: The Four Levels of Maturity

The Four Levels of Maturity is an easy-to-grasp simplification of some developmental psychology concepts.

Combining this way of looking at maturity with the concepts in Leadership and Self-Deception (from The Arbinger Institute) has proven to be a very effective way to help people learn how to tolerate other people.

Level I: SELFISH (the level we’re all born at)

Behaviors on this level are focused entirely on gratification. Examples of this behavior include littering, being late, answering your cell phone or texting in the middle of a conversation, not flushing a public toilet because you don’t feel like touching the handle. These are all selfish behaviors, executed with little regard for the impact they have on others.

This is where the selfish end up after they think that they have grown up. The mindset here is “I’ve taken care of all my stuff. It doesn’t matter to me if you have done the same. None of my business.” Behaviors at this level include throwing your own litter away, but walking past others’, being on time, but not offering a ride to someone else who might also be late, finishing your work ahead of schedule, but failing to offer help to those who are a bit behind – “Not my problem, not my fault.”

The first two levels are both self-centered, with no real regard for “team”, or other people in the world.

If you’re familiar with Leadership and Self-Deception, those levels are referred to as acting “in the box.”

Behaviors at this level include working together, according to everyone’s strengths, weaknesses and capabilities, to get things done for the team, or the world at large. “I’ll pick up this letter, if you hold the door for me” or “I’ll staple the cover pages to the reports if you run them up to finance.” Most successful organizations see these behaviors relatively frequently from their team members, and nearly all the time from their leaders. But – the most effective leaders and team members cannot rest at this level, because there will always be people acting at levels one and two “in the box”.

Acting at this level means you have made a consistent commitment to meeting the needs of others, and of the group, in order to get things done. It isn’t about being a push-over, or enabling selfish behaviors in others, but an acknowledgment that many people have habitual behaviors at levels one and two.

If you’ve read Leadership and Self-Deception, you really grow to understand this idea:

When people are “in the box,” or acting at levels one and two, there is absolutely no patient way to get them to grow up and act at levels three and four.

While there is no efficient way to do this, there is an effective way – constantly act “out of the box.” That is, constantly demonstrate behaviors at levels three and four.

An extra note to parents, or those who work with young people:

Research shows that adolescent brain development keeps young people operating at levels one and two as their default mode of operation.

Anthropologically, this is the way the species survives into adulthood in order to create more of the species.

So, when working with young people, it’s especially important to understand that obnoxious selfish behaviors are normal.

This does not mean they are acceptable, just that our role as adults is to help them understand there are better ways to act.

Thanks to Dr. Tim for his simplification, and to the Arbinger Institute for their outstanding book on this topic (one I recommend every leader reads).

Understanding the four levels of maturity, and “the box,” has been very helpful to effective leaders and organizations everywhere.