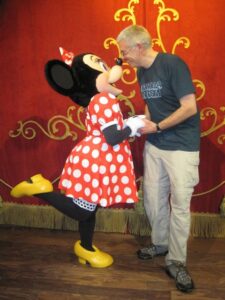 Anyone who has been following the rise and acceptance of Dwolla is aware of the T-shirts. Ben Milne and company have been giving away and asking folks to wear their T-shirt, and to take pictures of it being worn in interesting places. This has been fun for me for two reasons, which I will illustrate with two stories.

Story one:
Since 1996 I’ve been involved with an outfit called Iowa’s Ambassadors of Music. This is an organization that takes a few hundred young people at a time on a 16 day tour through highlights of Western Europe.

When I went on the trip in 1996, I had a student, Art, who wanted to go but couldn’t. I ran into him in the Sumner High School band room the day before my departure and he talked about his sadness that he wasn’t going. Then, he did something silly. He grabbed the mouthpiece out of his trumpet case, handed it to me and asked me if I would take it along with the tour, so that at least his mouthpiece could go on the trip. I laughed and told him I would take it with me to Europe.

But I had some fun with that. I didn’t just take it with me; I put the mouthpiece in nearly every single photograph I took on that trip. Photos of the mouthpiece at the Eiffel Tower, the white cliffs of Dover, Big Ben and the Houses of Parliament, the Swiss Alps, the Olympic ski jump in Innsbruck, the canals of Venice, the Louvre and even in front of the Mona Lisa. 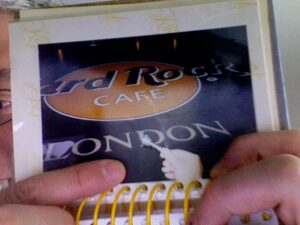 Dozens of photos had Art’s mouthpiece in it. It was great fun to do, and great fun to share. So, getting shots of a Dwolla T-shirt in diverse places? Helpful, certainly, and also great fun.

Story two:
Several years ago, I learned about a really cool website. I knew that my students would dig it, but learned that they had never heard of it. It was too new, too cutting edge. So, one day I canceled my regular lesson plans, wheeled in a computer and projector, and threw this website up on the wall, and demonstrated its capabilities. They were blown away and had never seen anything like it.

One student, Jesse, was so jazzed about this website and what it did that he wrote an e-mail to its founder. The founder of the company was so encouraged by this, and pleased that this student had been introduced to their site by a teacher, that he wanted to know Jesse’s T-shirt size, and mine, too.

A few days later Jesse got a box in the mail. It contained stickers, buttons, and two T-shirts; one for me, and one for Jesse. We wore them proudly and passed out the buttons and the stickers to all the new fans, because everybody thought this website was super cool.

I wore that T-shirt frequently, especially when I travelled, and spread the word about a new website that I thought was super cool that and everybody should know about. Perhaps you’ve heard of it; it’s called Pandora. 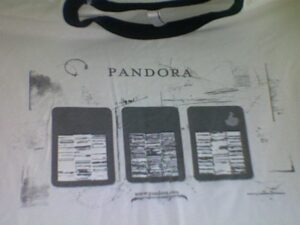 So between taking pictures of things in cool, diverse, and unexpected places, and promoting a great company with a conversation piece T-shirt, its been easy to have fun supporting Dwolla. Their mission, marketing plan, and coolness has made it a company that I am proud to support and enjoy supporting.

There’s no punchline, no “lesson.” At least not from me. But I do think there are things to be learned from unique stories. So maybe the lesson is this: tell stories, and pay attention to the stories of others. The world is a beautiful place full of people doing cool things. Watch and listen.