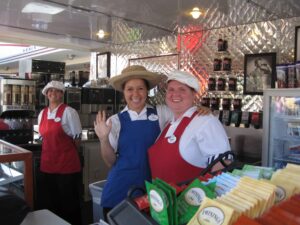 …and it was perfectly appropriate.

Disney cast members are highly trained in many ways.  You likely know of their magical customer service and commitment to staying in character, and making sure the parks run smoothly, but the order in which those commitments play out is not at all random.

Disney gives all staff (cast) a clear priority order of their Basics, or Keys:

If everything is going well – no safety issues, everyone is cooperating, and no challenges to staying “in character,” then cast members are free to do whatever is most efficient to get things moving quickly for guests, whether it’s a line, or food, or a character interaction…

But they will let efficiency slide to keep the “show” intact – to stay in character. If you eat at the 50s Prime Time Cafe, part of the show is that they bring you nothing unless you say please. For everything.  I asked for “diet Coke, and water, please” and she brought me water.  “Still waiting for that Diet Coke” I said a few times, until I realized that I had never paired “Diet Coke” with “please.”  Once I did, there it was. Our server came around and hovered a lot to give me the opportunity — totally inefficient, but part of the show.  And my daughter loved it.  And have you read this post?

And the show will slide for the sake of efficiency.  The cast at The Haunted Mansion is glum and stern, and a bit creepy.  The ride itself isn’t that scary, and when a small child started crying in line, a cast member broke character, took the child aside, sat on the curb with her, and explained – you may even say spoiled – every single effect and visual of the attraction.  Smiled and encouraged and patiently explained.  Courtesy trumps show.

On the Winnie the Pooh attraction, a toddler ahead of me worked his way out from under the lap bar in his Hunny Pot and started to stand on the seat.  So quickly that there was no time to politely modify his behavior.  “HEY!  SIT DOWN!  SIT DOWN NOW!!!”  hollered the cast member — out of character, not in show, not efficient even (she stopped letting people on the attraction in those moments), and certainly not courteous.  The toddler obeyed, we were all shook up, but it made perfect sense.  Safety is huge at Disney — and should be for you, too.  A safe culture frees people from fear… (ah, that’s another post.  I’ll save it.)

If you’ve heard me talk about giving up Role power for Relationship power, you know that Role power is absolutely required when safety is in jeopardy.  And when that’s the only time it’s invoked, it’s pretty powerful.

Another thing that’s powerful?  A clear priority of what you need to be most mindful of in any situation.  Watch for Safety, Courtesy, Show, and Efficiency as you go about your day; or execute your own work.  See how that works out.